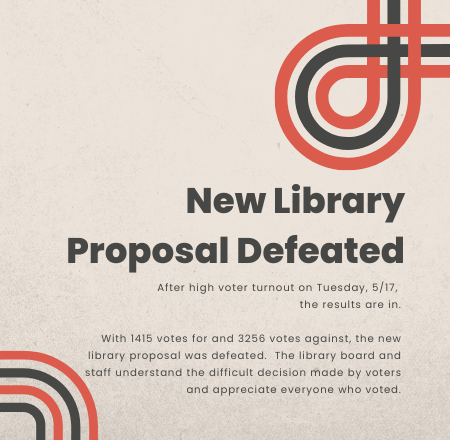 VICTOR — Victor and Farmington residents nixed plans Tuesday for a new 24,000-square-foot facility for Victor Farmington Library. Residents voted 1,415 to 3,256 against the proposed $16.6 million project at 160 School St. in the village of Victor, which would have opened in 2024.

“After dedicating over five years to researching a larger library, consulting experts, and evaluating options, we understand and respect the hard decision voiced by voters,” said Library Board President James R. Myers.

“No one could have imagined the confluence of events that made the new library project such a difficult project to bring to fruition,” said VFL Communications Committee Chair Mitch Donovan. “While the vote to build a new Victor Farmington Library failed to pass with a sufficient majority, the Board of Trustees and the staff of the library will continue to serve the library users to the best of their ability.”

The library’s existing 8,900-square-foot facility at 15 W. Main St. opened in 1995 to serve up to 15,000 people. But due to a three decades-long population surge in Victor and Farmington, some 25,000 residents now depend on the library for their education, research, casual reading and internet needs, said Library Director Tim Niver.

“We recognize the current economic and global circumstances make this a very difficult time to support a larger library,” said Niver. “The board of trustees, volunteers, library staff, and I appreciate this opportunity to hear the voice of voters. We look forward to continuing to provide the friendly, personalized service Victor and Farmington residents rely on. We appreciate everyone who voted.” 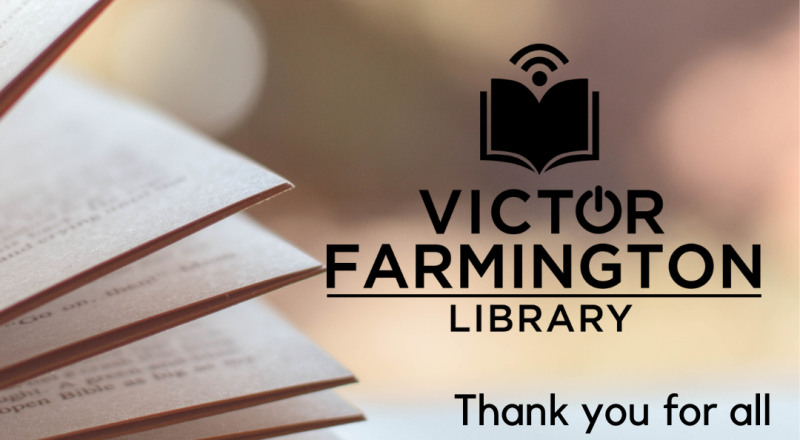 In recognition of outstanding community service, the Rochester Regional Library Council (RRLC) has named Victor Farmington Library its 2022 Public Library of the Year.

The recognition is the culmination of a celebration of libraries and library staff that begins with National Library Week in April, and is sponsored by the American Library Association (ALA) and libraries across the country.

Local libraries and staff were nominated by community members and supporters. RRLC quoted one patron’s comment when awarding the honor to VFL:

“If you’re ever in a bad or sad mood, visit this library! It is warm and inviting, the staff is exceedingly friendly, and you immediately feel welcome and part of the family. It’s like going to your grandma’s house! Even better because you’ll immediately find something to engage in — local art on the walls, interesting displays, new books, fun things to check out (like Pickleball paddles and hiking poles), and maybe a class or activity to participate in. It’s definitely my happy place.”

VFL and its Director Tim Niver were one of three Library of the Year winners and six Library All Star winners from around the region. Honorees are listed below and were recognized at RRLC’s Annual Meeting on Thursday, May 12, 2022:

The Rochester Regional Library Council is a not-for-profit agency that helps libraries in colleges, hospitals, schools as well as public libraries, work together to bring better library services to all the people in the five-county Rochester region – Livingston, Monroe, Ontario, Wayne, and Wyoming counties.

We’ve recently added New Library FAQs, Part 2, as well as the 2019 Community Survey and a list of ways it was distributed. Please visit the page for all of the latest info on the new library. 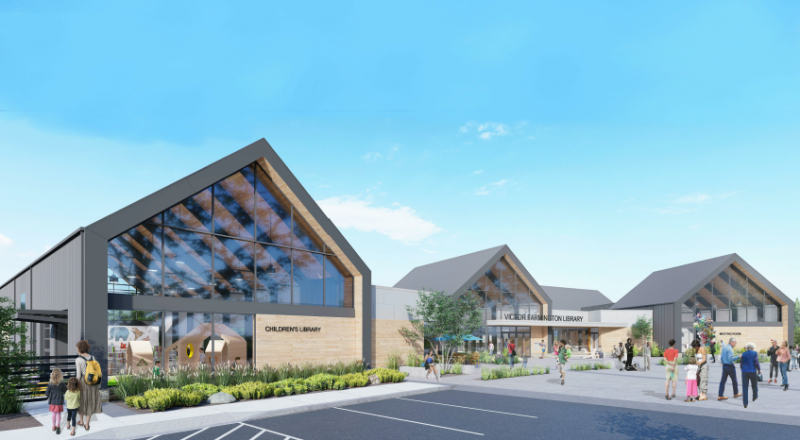 In response to rapid residential growth and escalating demands for state-of-the-art services, Victor Farmington Library leaders have unveiled plans for a new 24,000-square-foot facility at 160 School St. in the village of Victor.

Voters will weigh in on Tuesday, May 17, from 6 a.m. to 9 p.m. at the Victor Primary School Gymnasium to determine whether the project moves forward. On the ballot alongside the new library and its annual operating budget will be the Victor School District budget and School Board elections.

Meanwhile, residents will have a chance to ask library-related questions and give input at information sessions on Tuesday, March 15, at 6 p.m. at Farmington Town Hall, and on Wednesday, March 30, at 7 p.m. at Victor Town Hall.

The plan offers an upgrade some say is long overdue. The library’s existing 9,000-square-foot facility at 15 W. Main St. was designed in 1996 to serve up to 15,000 people. Due to a three decades-long population surge in Victor and Farmington, some 25,000 residents now depend on the library for their education, research, casual reading, programs, and internet needs, says Library Director Tim Niver.

A projected $14.1 million of the expansion cost would be financed through loans issued by a local bank, over the next 20 years. The proposal reflects an estimated library tax of $.82 per $1,000 of assessed value on properties in the Farmington and Victor communities. For the average home, assessed at $300,000, the tax bill to support the new library would be less than $246 annually, or $20.50 a month.

Proponents say the monthly investment to fund the new library compares favorably to Netflix ($16), Audible ($15), a monthly hardcover purchase ($25), or a recurring dinner out for a family of four ($80-$100).

Library Board President James R. Myers said he’s grateful for the number of donors who have already stepped up, allowing library leaders to put a reduced number in front of the taxpayers.

“The Victor Farmington Library Board of Trustees have monitored expenses associated with the proposed library at every step in the process,” he said. “We’ve reviewed each cost line by line, eliminating nice-to-have features and swapping out construction materials.  As a result, we’ve been able to cut nearly $700,000 from the total cost, while still proposing an effective and efficient library.”

Of the 42 libraries in the Pioneer Library System, the Victor Farmington Library ranks annually either first or second in circulations and door counts, according to victorfarmingtonlibrary.org.  In 2019, more than 191,000 items were borrowed and nearly 121,000 people visited the library in person. A typical weekday saw 400 – 500 people come through the doors, while small meeting rooms and tables seated more than 4,000 individuals for non-library functions.

“This library is a very active, vibrant destination that is used for more than just borrowing books,” said VFL Director Tim Niver.

The search for solutions began formally in 2017, with a study of the library’s space needs completed in 2018. A 2019 community-wide survey revealed that 82 percent of responders believed a larger library was needed.

Options for expanding the library upward were explored, but the addition of a second floor to the existing library was ultimately ruled out when architects said the foundation couldn’t support the added load, and parking would be insufficient to meet the increased foot traffic. An expanded library would require parking for at least 100 vehicles, and the current footprint can accommodate only 50.

Would building a second branch in Farmington offer a solution? VFL leaders say no, because the cost of constructing another facility, along with doubling operational and material costs, would be much more expensive than operating just one building.

Since 2017, twelve new locations in the village of Victor have been considered. All except 160 School St., not far from VFL’s current location, were eliminated due to cost or other criteria.

“There’s so much more to a library than just books,” said Niver. “It’s a learning center, a gathering place for friends to play games, a place where you can hear a concert, practice tai chi, see local artwork, use public computers for free, and the list goes on. The library is like an iPhone, but better.”

Library leaders say the new facility would enhance the quality of life for current residents and help position Farmington and Victor for continued commercial and residential growth.

Community members say ample parking, a separate children’s area, a larger community room for bigger programs and events, a drive-up book drop, room for more books and movies, and a new coffee shop are among the features they look forward to most.  Incorporating Universal Design principles and enhanced ADA compliance will ensure equal access for all.

“The Victor Farmington Library serves a population that has grown exponentially in the last 25 years and is projecting continued growth over the next 10 years, especially in Farmington,” said Donovan. “Yet we are stuck in a building that was considered by some to be too small when it was built 25 years ago. How many families stay in their starter home as their family matures?

“I believe the communities of Victor and Farmington are ready for a modern, state of the art library,” he said. “The proposed library will offer space for outdoor events, a reading garden, a drive-up book-drop and electric vehicle charging stations, some of which are already available in neighboring libraries. Let’s keep our residents right here in their ‘home’ library.”

Residents can find updates with the latest numbers and insights, along with a comprehensive list of FAQs and answers, posted at victorfarmingtonlibrary.org/new. A YouTube video describing the proposed expansion can also be viewed at Proposed library FAQs.

Community members are invited to ask questions and give input at information sessions on Tuesday, March 15, 6 p.m. at Farmington Town Hall, and on Tuesday, March 30, 7 p.m. at Victor Town Hall. The meetings are in person, but those wishing to participate via Zoom should register online at victorfarmingtonlibrary.org/event-calendar.

On Tuesday, May 17, from 6 a.m. to 9 p.m. voters will determine whether the new 24,000-square-foot facility moves ahead. If approved, the 160 School St. property would be purchased in mid-2022 and current tenants relocated.

Demolition could begin in early 2023, and construction would likely take at least a year, with a grand opening targeted for the second quarter of 2024.

“Throughout this process the library board has gathered input from residents”, said Myers. “The majority of the people we’ve spoken with have expressed enthusiasm. However, if the larger library is voted down, our option to purchase the property at 160 School St. will expire, and due to the time and money already invested in considering a larger library, the library will remain in its current location for the foreseeable future.”

INFO SESSIONS: Wed., May 4th at 7 pm at Victor Farmington Library. No registration is required to attend in person. To participate using ZOOM, please register.

Did you know there are only two counties in New York State that are growing in population? Ontario and Saratoga Counties continue to attract new residents while other NY counties are experiencing a decline. This article from the Democrat and Chronicle shares some of the reasons for the growth we’re seeing and discusses options to help other counties in New York.